Over 2,000 activists from ‘No Borders’ [1] marched today in Copenhagen from Israel Plads to the Danish Ministry of Defense to highlight the increasing links between militarization, climate change and displacement of peoples searching for safe and secure living conditions across the world, particularly in the Global South.

During the march, the news broke out regarding the G77 delegates resistance to accepting insufficient agreement from the Copenhagen negotiations, to a cheer from the crowd.

The colourful protest started at 12:00 and finished at 14:00. The demonstration was surrounded by riot police for the entire march even though the No Borders Network had received legal permission for the march. By the end of the demonstration street medics reported one broken hand from a baton strike and two dog bites, one of which was sustained by a journalist.

Dan Glass, for Climate No Borders said, “Today we stood in solidarity with those who are already displaced by the current effects of climate change, wars for resources, and those who will experience the negative effects of the false market based solutions being proposed at the COP15. This has been an ecitigstep in thethe run up to the Reclaim the Power action on Wednesday”

He added, ‘All the activists were determined to not let the police intimidation [2] stop their cries for justice and loudly chanted “no borders, no nations, stop deportations!” from beginning to end.’

At the end of the demonstration activists decided to untie and deflate the orange globe sponsored by the Ministry of Climate Change in Parliament Square, in order to highlight the Danish attempt at creating a real and just solution to climate change as simply hot air. The recent Danish Prime Minister, Anders Fogh Rasmussen is now the leader of NATO, which has been pushing for ‘security crackdowns’ and reinforcement of barriers to prevent migration from places more immediately effected by elite-caused climate change.

Amy Jacobs from Climate No Borders said, “Instead of dealing with the root causes of this migration for survival, governments around the world are instead employing increasing levels of border control and militarization. We reject this inhumane racist repression, and demand complete social change to a borderless world where all people can survive climate change and war, and not just the rich, those born in Europe, or the documented.”

[1] No-borders is an international network fighting for the principal of freedom of movement of all. The network works throughout the world fighting deportation, heightened border surveillance and control, as well as specific solidarity projects in Calais and Lesvos, Greece, where migrant treatment is particularly extreme.

[2] In addition to today’s exaggerated police presence, the police have been trying to deter activists from taking to the streets by using a tactic of indiscriminate mass arrest and imprisonment that is now legal under new laws passed in Denmark specially for the COP15 summit.

The activist legal team – RUSK – can confirm that over 1,000 demonstrators have been placed in jail, most of which were arrested without a cause. Activists have been tied up in the street without access to medical or basic toilet facilities. While in prison there have been reports of the police using pepper spray. 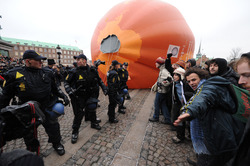 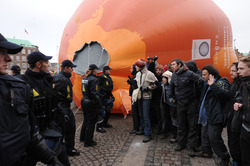 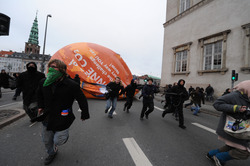