In the face of a PR nightmare, Pennsylvania authorities have withdrawn all charges against two members of Tortuga accused of using Twitter to aid protesters at the G20 summit in Pittsburgh. At a hearing today, instead of oral arguments regarding a defense motion to unseal the secret 18-page affidavit authorizing the arrests of Elliott Madison and Michael Wallschlager at a motel just outside of Pittsburgh, the prosecution immediately moved to withdraw all charges against the two before the defense had a chance to argue its case. Although clear from the beginning that these charges were absurd based on the State’s very own laws, our housemates were incarcerated for 36 hours, had their van towed and belongings confiscated, and one house member was given $30,000 in straight bail. 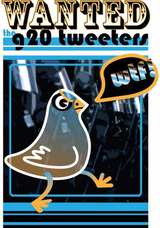 The District Attorney and his spokesperson were at pains to explain why the State would drop all charges against these dangerous twitterists and of course, refused to admit that these charges were unconstitutional and a heavy-handed attempt to scare anarchists and others from protesting in ways unsanctioned by the government. Instead, the prosecution says they decided that pursuing the charges “would be unwise” after consulting other law enforcement agencies and because of other pending investigations. The secret affidavit authorizing the arrests in Pennsylvania is set to become public on Nov. 23rd. We imagine the Pennsylvania State Police will seek an extension to keep this document sealed—perhaps in order to hide the flimsiness of their secret evidence? However, no matter the reason, we will fight to unseal this document and we will not let the State hide behind sealed evidence, obscure innuendo, and other traditional tactics used by secret police.

Though it is a victory that all the charges against our two housemates were dropped in Pennsylvania, we cannot forget that there is still a mysterious grand jury and other “ongoing investigations” out there. While we may be free from criminal proceedings now, we are still under the threat of future charges/indictments. What these might be, when they might happen, and what cause the State has is, of course, secret. Although our only option is to wait and see, we refuse to let them go about their business ruining our lives in peace and quiet and will continue fighting them every step of the way.

For more information and updates, please go to friendsoftortuga.wordspress.com